From the Newsroom to the Classroom: David Campbell is Trading His Camera for a Whiteboard 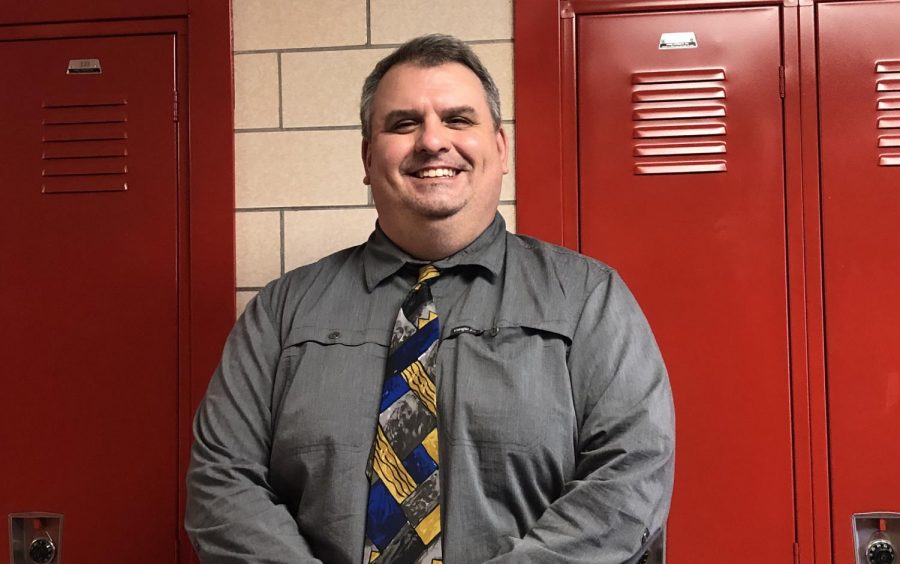 You may see him around the school, either teaching social studies or even when he’s at your local sporting event. David Campbell is your very own Cub student-teacher for Madison Consolidated High School. Even though Campbell still writes and does photography for The Madison Courier, he performs student teaching duties at MCHS concurrently. In fact, he has been writing The Courier for over 20 years but states he’s always been in teaching mode, primarily when he has worked with younger journalists in the past. After 23 years on the job, Campbell is looking to broaden his horizons.

Campbell stated, “I’ve always kind of done it (teaching). I’ve always been interested in it, and I’ve always thought I would succeed at it. I was like alright, let’s just give it a shot.”

It was initially the allure of the bright lights of Hollywood that sent Campbell into post-secondary education, where Campbell went to college with the dream to become a director of television and movies. It was not until later that journalism came calling.

Campbell stated that he was a theater major at Indiana Univerity Bloomington and spent two years there, but his heart changed, and he ended up coming back home. Campbell started bouncing around, and then he ended up at The Courier. He spent 12 years there when he figured to switch his degree. Since he had been in journalism for over a decade, the Indiana college board switched his major to journalism. Using some of his credits from his theater background and after changing his major, Campbell received his journalism degree from IU.

When he finishes student teaching, Campbell would like to try and stay in Madison. Campbell said he loves being here, and he loves the people here, as well.

“I’ve known lots of people here in the school anyway due to the paper, and I’ve enjoyed the experience. If there were any openings, I would apply for those,” stated Campbell.

Campbell started at the paper in 1998 and claimed he had spent half of his life at the paper. Things began to change when The Courier was sold. It was a terrifying time for Campbell.

“It was probably one of the scariest times for the paper. We got sold officially on *February 1st, 2020 (sic), the pandemic hit in March of 2020. The Courier hadn’t been published for a month (under new ownership), and we were still figuring things out when everything had shut down (due to the pandemic). So the combination of those two things pushed The Courier.”

That fear of the unknown and budget cuts by new ownership spurned Campbell to make his life-changing decision.

Campbell stated that the paper had about 28 employees when the new owner purchased The Courier. According to Campbell, within a few months coupled with the pandemic, the number had been reduced close to six. “I was down to 20 hours a week in March, April, and May,” he said.

For someone who has been in the business of sportswriting for so long, it is only natural to have many memories stick out. Still, many of Campbell’s favorite memories were when Madison was competing with the state’s very best.

“No offense to anybody, but a Tuesday night basketball game in the middle of January is pretty forgettable no matter how good the game is. Still, the first year I was here at the paper, Madison won the state championship in baseball. The experience of going to those games, for instance, going to games in Jasper or in Indy where all the action is going on, was probably one of my favorable memories. You were involved with these big-time papers and these big-time media stations, but the team you were covering was the big dog.”

“Madison was number one all year long,” Cambell continued, “and they were the worst team in the state, and it’s just something neat about being the guy covering all of that. The hydroplane races also stand out. I’ve covered races in San Diego and Detroit. So it’s always neat to travel.”

Campbell claimed that the best part about being a journalist is traveling and just seeing places that you haven’t seen before. Now it’s time to learn a new trade.

“Some days I’ll plan a lesson, and I’m like oh, this will last for 45 minutes, and it lasts like 28 minutes, and I’m like, oh crap, what am I going to do for the remainder of the time? So yeah, I have learned time management. I have also learned that teenagers do not like virtual reality, don’t get me wrong, they love it when it is part of the lesson they aren’t learning.”

While it takes a certain amount of bravery to leave a profession after 23 years, Campbell realizes he has a lot to learn and look forward to in the years to come. At least he won’t be stuck in a gym in the middle of January on a Tuesday night.