On Wednesday, August 18th, the Madison Consolidated girls soccer team competed against Switzerland county on the football turf field, which doubles as the Madison soccer field when occupied by MCS football teams. Their first game was against Scottsburg on Monday, August 16th. They won against Scottsburg but lost to Switzerland county. The girl’s season started during the summer going into the school year. The girls have been striving towards winning and improving during this season. The team is not independent; it is a joint effort. Positivity is everywhere in this team.

Team captain,  junior Molly Armbrecht, did not start soccer until her sophomore year and was unsure what she was getting into.

“I never really knew that much about soccer, I thought it was just a game, you play for 8 minutes, and you’re done,” Armbrecht said.

Armbrecht views her team more as a family, and they are always working together.

“I’ve really seen that it’s a family out here, and we all work as a unit. On and off the field, we have each other’s backs.”

Armbrecht’s main goal this season is to regroup and build more of a team. Armbrecht described soccer as “a whole lot of running.” 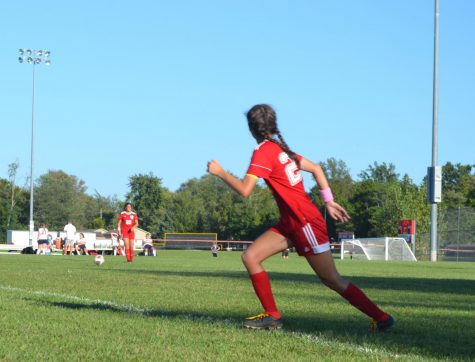 Senior Taylor Lynch started soccer her sophomore year of high school, as well. While mostly known for her prowess on a basketball court, Lynch has come to relish the camaraderie that soccer provides.

“We just have a lot of fun, and we always look forward to practice. We crack a few jokes but also try to take it seriously.”

Lynch’s main goal this season is striving towards winning sectionals.

“It’s just a great feeling,” Lynch said. “I would love to be able to win a sectional title.” Lynch’s perspective of the sport changed tremendously once she joined the soccer team.

“I didn’t understand it, really. I have a lot more respect for the sport, passing the ball with your feet instead of your hands like basketball.”

Head coach Janet Hertz is in the midst of her sixth season with the Lady Cubs. Hertz said she loved the sport and wanted to get back into the community.

“I fell in love with the game as a teenager, and I wanted to get back into the community of it,” Hertz said.

Hertz wants the team to have a voice in everything.

“I feel like the kids have a say in the run, and the coaching goes in as well.”

While winning matches and tournament games are always a focus, Hertz detailed how wins and losses for her teams do not always measure success.

Hertz explained, “For us, how the season turns out is also off the field and how many community service hours we do. It’s always about constant improvement and finding confidence going forward.”

She evaluates every opportunity and the character development of each player.

As the Lady Cubs continue their 2021 season, if Armbrecht’s and Lynch’s comments are any indications, the team enjoys the rigorous work and friendships that make playing soccer for the Lady Cubs special.