After Postponement, Cahall and Smith are Crowned Winter Royalty 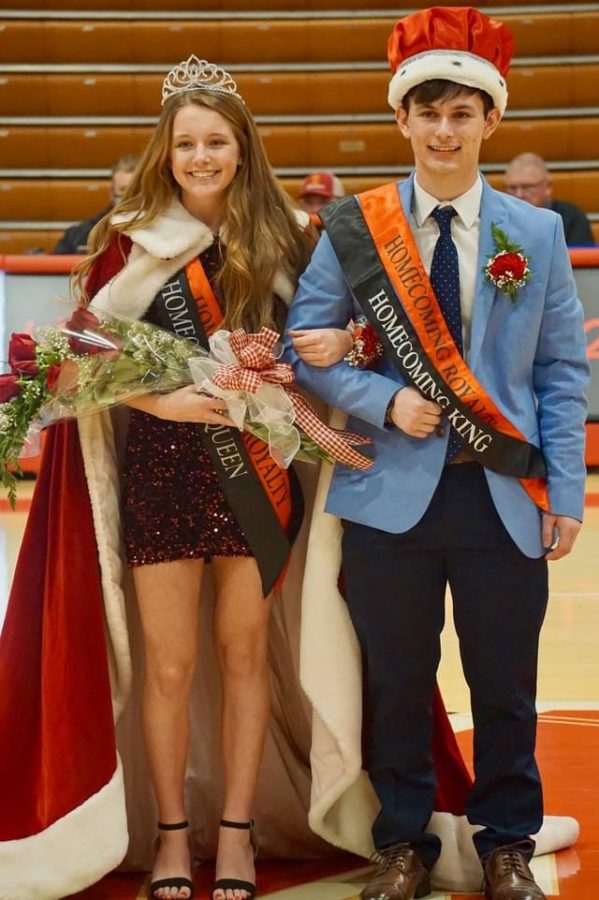 Although the wait was longer than usual, the Madison Consolidated High School Winter Homecoming finally happened last Friday. After a unique voting process where the students voted online to decrease the spread of Covid-19, the students elected senior Jacob Smith for the king, and the queen-elect was senior Brett Cahall.

Smith is the co-host of the MCHS sports broadcast, Smith and Forner in The Corner, co-president of the Pep Club, JAG President, and is the current Student Body School Board Representative. Next year, Smith is going to attend Ball State University to study Speech-Language Pathology. Jacob is clearly extremely involved and admired by his peers.

After becoming royalty, Smith was elated. He stated, “I didn’t really expect to win because of the quality of the six king candidates, but I was super happy even to be voted in as a candidate.”

Smith sports a confident, outgoing personality. He has made friends with students of all ages and from every class and is a humble and respectful student and a great leader.

Smith also expressed how happy he was to be respected enough by his peers to be voted Mr. Cub.

Smith stated, “(The) first thing I did after I was crowned was talk to some of the students in the student section and made sure to get pictures with everybody that wanted one.”

Cahall is a four-year member of the MCHS girls’ cross country and track teams; she played basketball for two years and decided to join the swim team her senior year.  Cahall is also a member of the National Honor Society, Student Athletic Council, and Pep Club. Next year she will be attending Bethel University to study Kinesiology, as well as continuing both her cross country and track careers. She was recently featured in The Madisonian for her Bethel signing. You can read about it here.

After being crowned by her sister, Brett Cahall stated, “At first I was in shock that they announced my name, and then to have my sister be the one to crown me was pretty cool.”

Now the younger Brett can continue the tradition of passing the crown to the next winter queen, as she will be asked to crown next year’s winter homecoming queen winner.