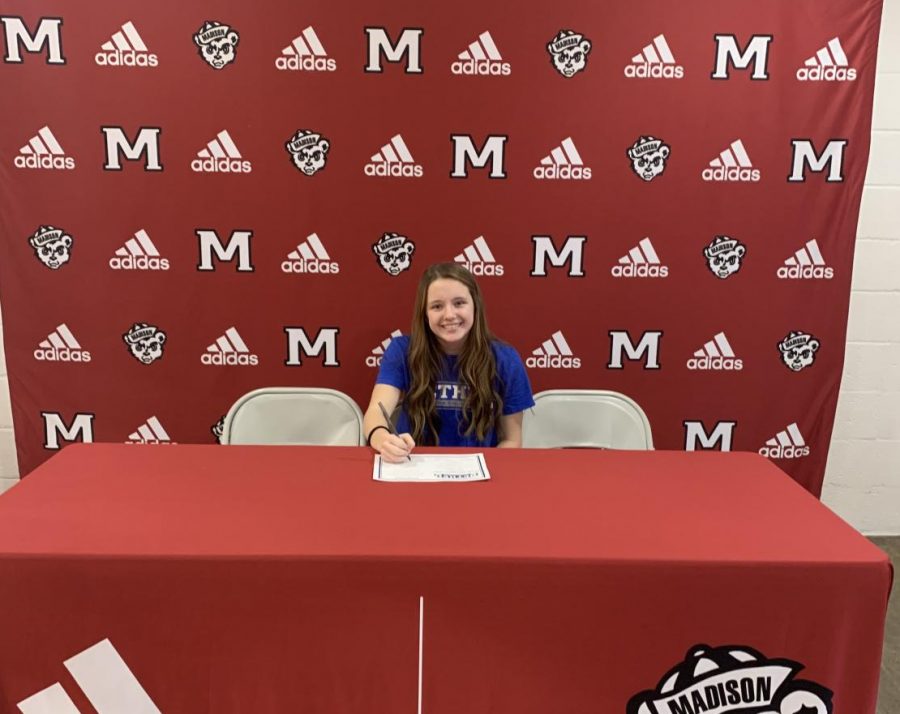 On Friday, January 15th, Madison Consolidated High School runner Brett Cahall signed to run cross-country and track at Bethel University. BU is an NAIA school with a student body of only around 1000 students. It is located in Mishawaka, Indiana, which is just east of South Bend.

“I chose Bethel University because of the small campus and the family-oriented team.  It wasn’t a tough decision after visiting Bethel. As soon as I left, I knew it was where I wanted to go to continue my running and academic career,” stated Cahall.

Cahall is most excited about the new adventures she will encounter and the new teammates that will become family. Cahall stated, “I will miss my family and friends that will be back here in Madison, but I am looking forward to the next four years.”

While ruminating on her career at MCHS, Cahall stayed humble.

“I would like to thank my coaches throughout the years for making me the runner I am today and Coach (Ryan) Sommers for giving me the opportunity to continue my running career at the next level. I would also like to thank my family and friends for always cheering me on and believing in me at every meet over the years,” stated Cahall.

Brett Cahall is the daughter of Shane Cahall and Christi Cahall. She has two sisters, Morgan and Cameran. Morgan graduated from Madison Consolidated High School in 2020, and Cameran is a Sophomore at MCHS. Brett joined the MCHS swim team this winter. Other than running, Brett likes to eat at Taco Bell and McDonald’s. Her favorite activities are to drink McDonald’s Diet Coke and watch Survivor.

Brett has enjoyed running for as long as I can remember. She has always talked about running competitively at the next level after high school. Her top choices were Bethel and Saint Mary’s of the Woods College.  She likes cross country more than track because she does not like running in circles around the track.