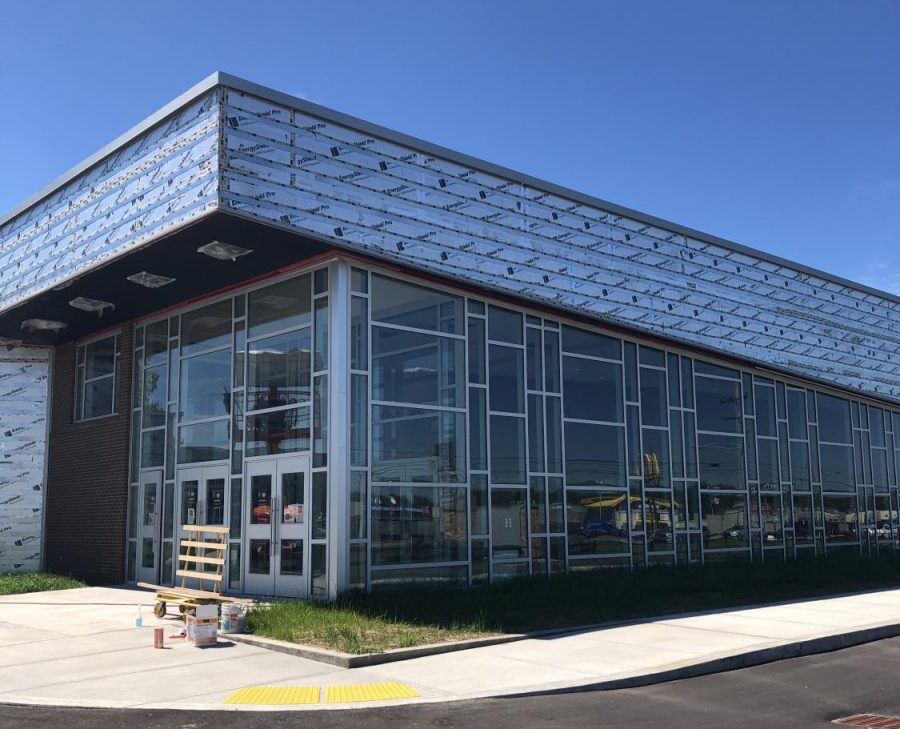 After many months of construction, the upgraded Opal E. Sherman auditorium at Madison Consolidated High School is finally ready to be unveiled. After months of work and a heap of money have been put into the auditorium, students and community members alike are very excited to see it in action. Over the summer, the MCHS cast of Disney’s: NEWSIES successfully performed for the first time in the new auditorium.

It is common knowledge among community members that the construction at the high school has been going on for quite a while now and the Madison Theatre department had been performing at North Madison Christian Church for at least two seasons. The theatre program was originally supposed to move in before March of 2020, but due to COVID some of the materials, like steel, were delayed because of factory shutdowns.

MCHS Theatre Director, Aaron Kelsey said, “ I know that in the very beginning there were issues with getting permits back from the state and then there was a lot of work to be done for the site prep before any building was actually done.”

There have been lots of new features added to both the outside and the inside of the auditorium. Some of those features include new actors dressing rooms, new technology features, LED lights for the stage, new carpet inside the theatre, and a new prop room. There are many features to the auditorium that have propelled it into the 21st century.

Kelsey said, “(The auditorium has a) new larger lobby, full restrooms, a (new)concession stand, and a 4,000-square-foot scenic shop for set and prop construction and storage.  We can now take set pieces off of the stage right into the prop room via a ramp, dressing rooms (previously cast and crew always had to use the halls or patron restrooms), costume storage room, new sound, and lighting equipment, and a very impressive 12′ x 24′ LED wall that can be any backdrop that we want.  It’s like a giant TV set on the stage and a new professional stage floor.”

Many of the MCHS upperclassmen are excited to start performing at the Opal E. Sherman auditorium and cannot wait for you to see what they have in store for the public eye.

MCHS senior, Chloe Kummer said, “I’m really excited for people to see the outside of the theatre because it just looks so nice. I think presenting our department in a way that makes people want to see our shows is really important and that starts before they even walk in the door.”

“There is honestly not one specific thing I am most excited for people to see when they enter the auditorium. I truly hope they can take in the whole experience. From the new stage floor to the extra room on the wings, the modern and functional lobby, the much-needed actor’s hall, the costume and prop rooms that are providing us all the storage room we could dream of, and the new screen and sound system for all of the needed technology aspects of theatre. The best part of theatre is appreciating every little detail that goes into the process,” MCHS junior, Brooklyn Cornelius said.

Although last year’s seniors did not get to have the theatre experience in the new auditorium that they wanted to have, this year’s seniors will hopefully be fortunate enough to continue the legacy of Madison theatre by performing this school year and in the future.

Kummer also added, “It feels really good to finally get to perform at the new theatre. We got to do Cubbies (the annual MCHS Theatre awards ceremony) and Newsies there this summer, and it was really fun to get to break in that theatre with the graduating seniors from last year.”

This semester’s productions will be set in October and November of 2020. On October 22-25, the Madison Theatre will be doing a play called Radium Girls. On September 18th, there will be school-wide auditions for Anastasia: The Musical, and that will be on November 12-15. Anyone in the school can audition.